Elktonia Beach, a 5-acre waterfront parcel on the Chesapeake Bay, is the last remnant of the original 180-acre property purchased by Fred Carr in 1902. Carr’s and Sparrow’s Beaches were privately-owned and operated by Fred Carr’s daughters, Elizabeth Carr Smith and Florence Carr Sparrow. “The Beaches” (1930s-1970s), as they were called, represented the heart of entertainment throughout the mid-Atlantic region and welcomed Blacks during a time of segregation. It has been the goal of Blacks of the Chesapeake Foundation (BOCF) to preserve the remaining 5 acres of The Beaches. 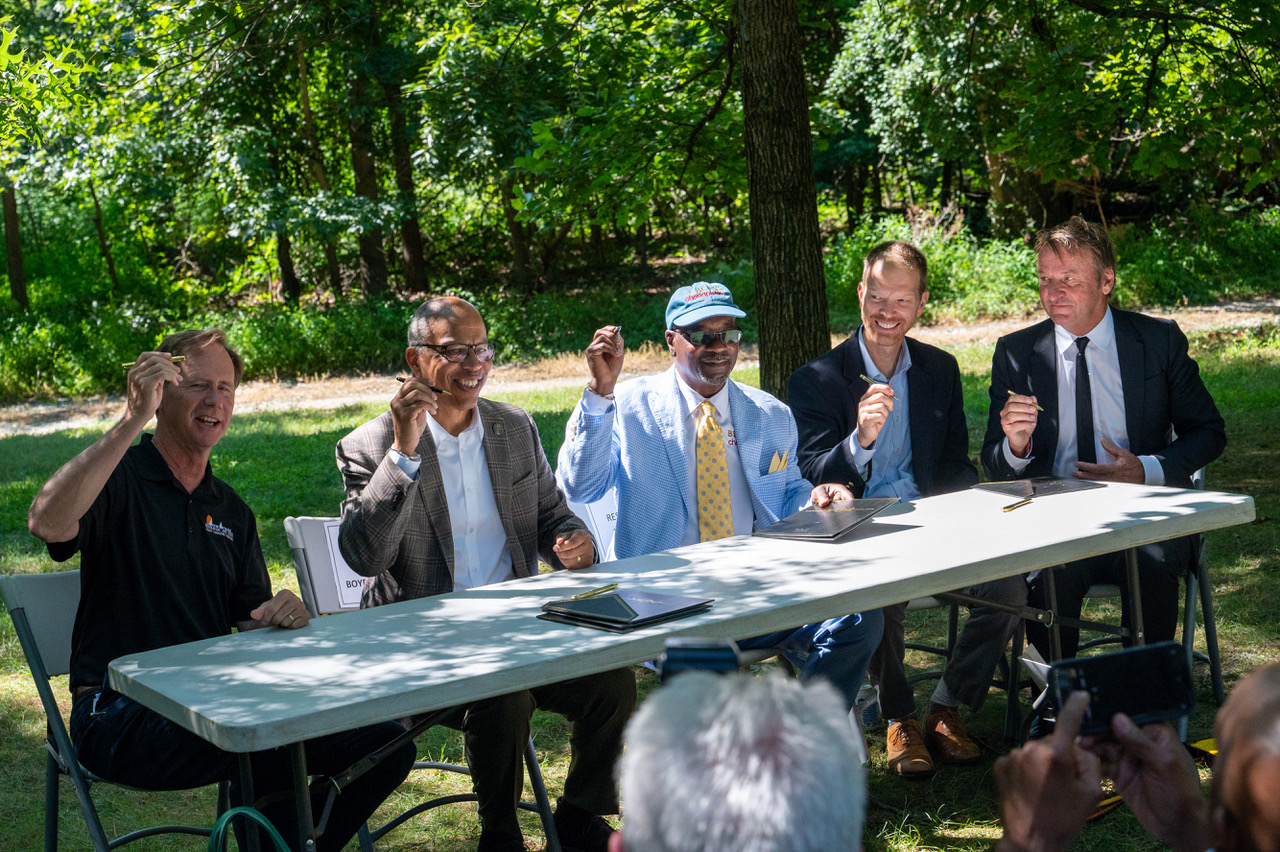 After years of advocacy and fundraising, in 2022, the City of Annapolis, BOCF, Chesapeake Conservancy and the state of Maryland entered into an agreement with The Conservation Fund to acquire the property through a patchwork of funding including federal, state and city Program Open Space funds. Additional support was provided by Governor Larry Hogan and the Maryland Department of Natural Resources, and federal appropriations were secured by U.S. Senator Ben Cardin. BOCF also received a Parks & Playgrounds Infrastructure Grant through the efforts of State Sen. Sarah Elfreth. In August 2022, a signing ceremony took place, transferring the property to the City of Annapolis and creating a new city park with beach access, Elktonia-Carr’s Beach.

“This is a dream come true,” said BOCF Founder and President Vince Leggett. “Blacks of the Chesapeake Foundation has been working for 15 years to preserve the meaningful and unique aspects of Black history and culture on the Chesapeake Bay at the site of Elktonia Beach, the last remnant contiguous to Carr’s and Sparrow’s beaches. This parcel directly fronting the Bay is so much more than just a pin or dot on a map. It serves as a national case study for the preservation and conservation of African American sites.”

Leggett continued, “The perpetual preservation of Elktonia Beach as a city park will provide all residents and visitors to our capital city of Annapolis with direct access to the Chesapeake Bay. This property will serve as an authentic space to interpret and share the rich heritage of African Americans who sought recreation, leisure and entertainment in these safer places, away from segregation.”

“Chesapeake Conservancy is proud to partner with Blacks of the Chesapeake and The Conservation Fund to see this dream become a reality. This parcel of land is symbolic of a significant part of Black history in the United States, as well as an important part of the City of Annapolis’ history. We are so grateful to the many partners and elected officials who helped create what will one day be a city waterfront park open for everyone to enjoy the Chesapeake while honoring our history,” said Chesapeake Conservancy President and CEO Joel Dunn. “This is a great day for everyone who has held a special place in their hearts for ‘The Beaches.’ Now this story can truly be told for generations to come.”

“We are grateful to Maryland Governor Larry Hogan, Maryland Secretary of Natural Resources Jeannie Haddaway-Riccio, Annapolis Mayor Gavin Buckley, U.S. Senator Ben Cardin and the private landowner who chose conservation for the future of this property. Also, thank you to our partners Blacks of the Chesapeake Foundation, The Conservation Fund and the Maryland Commission on African American History and Culture, as well as other supporters of this effort, including Maryland State Senator Sarah Elfreth and Anne Arundel County Executive Steuart Pittman,” continued Dunn.

There is now an opportunity to purchase the property immediately adjacent to Elktonia-Carr’s Beach. This would expand the footprint of the existing park. The home that currently sits on the property will be converted into an interpretive center and headquarters of BOCF. This will not only help tell the story of The Beaches but also the rich African American history and culture that has been a part of the Chesapeake Bay for generations.

We have a short time to raise $2,000,000 to purchase the adjacent property. The City of Annapolis has agreed to match $500,000 if the remaining funds are secured. We need your help to make this happen. Elktonia Beach is the last remaining vestige of the original iconic property. Preservation of Elktonia Beach as a heritage park and interpreting its history for the public will ensure its legacy is fully recognized. As a public park, now all people can visit, experience and enjoy the natural and cultural resources of the Chesapeake Bay.

“Sea Shells do talk, and they hold precious memories. When I clutch an ocean-worn mollusk’s shell to my ear, I can still hear the sounds of the waves, the music, laughter and tears.

“Unless one walks the site of the iconic African American beaches you can never fully understand what happened there.

“Unless one learns the stories of the heroes, you can never fully appreciate how their sacrifice gave us the freedoms we enjoy today. And unless you and I pass on the appreciation of these sites and why they are important, we cannot ensure the same freedom for our children and grandchildren.” “When Anne Arundel County was segregated, there was a place called Carr’s Beach (now Chesapeake Harbor), a summer haven for African Americans where the coolest people on the planet in music came: soul musicians Little Richard and James Brown, jazz legend Billie Holiday. Carr’s Beach was a major stop for these legendary artists.”