The Chesapeake Conservancy supports work beyond what the National Park Service could accomplish on its own, including: improving public access, supporting land conservation, conducting cultural research and environmental analysis, and providing outreach that enrich visitors’ experiences and create a sustainable future for the Chesapeake Bay watershed.

As we celebrate the 10th anniversary of the designation of the national historic trail, we honor the visionaries who saw the potential for the trail to connect people to the region’s deep history, remarkable natural beauty, and opportunities for recreation. They believed the trail could inspire people to cherish and conserve the Chesapeake as a national treasure.

The process of establishing new national trails usually takes many years. The Captain John Smith Chesapeake National Historic Trail was established in just under 22 months! This unusual speed was due to the tireless efforts of the trail’s believers. Leading those efforts was founder and chairman emeritus of The Conservation Fund, Patrick Noonan. Noonan wrote that “the impetus for the trail grew from conversations with my colleagues Gilbert Grosvenor and William Baker.… Together we formed the Friends of the John Smith Trail. Others enthusiastically joined us.” Grosvenor, president of National Geographic at the time, and Baker, president of the Chesapeake Bay Foundation, both credit Noonan with the original concept of a national historic trail to encourage modern-day Chesapeake explorers.

The Chesapeake Bay Commission, a tri-state legislative advisory commission, reported that Noonan raised the idea of a national water trail to memorialize John Smith at the Secretary of the Interior Dirk Kempthorne and Chief Stephen Adkins at May 2006 event to raise support for a new trail, DOI photo

commission’s January 2005 meeting. The idea immediately took hold as representing “the Commission’s comprehensive approach to Bay restoration, balancing water quality and habitat protection with culture, education, and access.” Led by Ann Swanson, executive director, the Chesapeake Bay Commission persuaded its partners on the Chesapeake Executive Council to urge U.S. Senators Paul Sarbanes (D-Md.) and John Warner (R-Va.) to sponsor legislation authorizing the National Park Service to study the feasibility of the proposed trail. Congress passed bi-partisan legislation for the feasibility study in July 2005. The Executive Council formally adopted a resolution urging the National Park Service to expedite the study so Congress would have time to act before the 400th anniversary of the founding of Jamestown, approaching in May 2007. 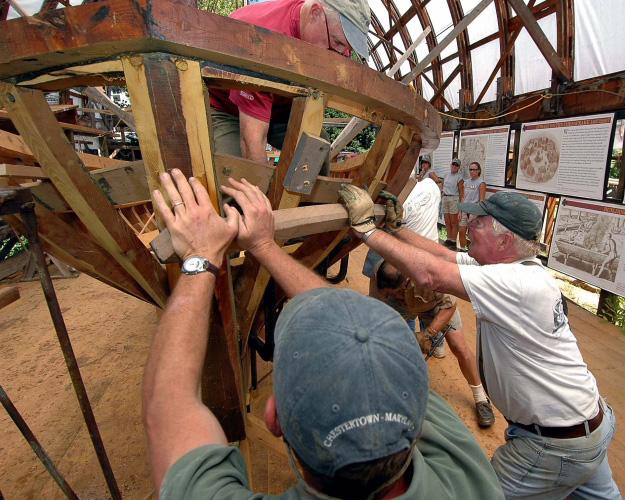 The Chesapeake Bay Foundation reported that thousands of its members signed on to letters to Congress. The fledgling Friends of the Captain John Smith Trail, founded in 2005, was growing along with support for the trail. Noonan assembled an enthusiastic group of talented people at The Conservation Fund to staff the Friends organization and work on the trail project.

The National Park Service completed the feasibility study in record time, noting “exceptionally high” public interest and support for the trail. The study concluded that the routes of Smith’s voyages met all the criteria for designation as a national historic trail.

Senators Sarbanes and Warner were joined by Senator Barbara Mikulski (D-Md.) in introducing a bill to authorize the trail. The late Congresswoman Jo Ann Davis (R-Va.) and 24 co-sponsors introduced companion legislation in the House of Representatives. H.R. 5466 passed the House on December 5, 2006; S.2568 passed the Senate on December 7; and on December 19, President Bush signed Public Law 109–418 establishing the Captain John Smith Chesapeake National Historic Trail as the 25th addition to the National Trails System.

Concurrently, many of the same partners worked to persuade Congress to appropriate funding for the National Oceanic and Atmospheric Administration (NOAA) to develop a “smart buoy” system that would mark and interpret the trail. The innovative Chesapeake Bay Interpretive Buoy System would not only provide real-time data on scientific measures, but also transmit recorded vignettes—accessible to schools and the public by cell phone and Internet—describing what the early explorers might have seen in the area 400 years ago.

The partners barely had time to enjoy their victories in Congress at the end of 2006. Much work remained to prepare for deploying the first of the buoys and officially inaugurating the new national historic trail. Both would happen in five months, during the anniversary weekend May 11–13, 2007—400 years from when the adventurers who had left England in December 1606 disembarked to establish a settlement at Jamestown, Virginia. Reflecting on the successful push to create the trail and what might lie ahead, Pat Noonan wrote in 2007: “Historic National Trails typically have a citizen group that supports them with stewardship, advocacy, and outreach. The trail’s current support group, called Friends of the Captain John Smith Trail…will likely provide a nucleus for whatever association comes next.”

That is, indeed, what occurred. With strong support from The Conservation Fund and other partners, the Friends began building capacity and a robust relationship with the National Park Service Chesapeake Bay Office—the Annapolis-based office designated to administer the new trail. Through a merger in 2010, the Friends of the Captain John Smith Chesapeake Trail and the Friends of Chesapeake Gateways—also a nonprofit organization working with NPS in the region—formed a new organization: the Chesapeake Conservancy.

The Conservancy had an even grander vision for the Chesapeake Bay. True to its roots, it embraced the Captain John Smith Chesapeake National Historic Trail as the inspiration and framework for its work to advance conservation and restoration on a large landscape scale. The Conservancy worked closely with the NPS Chesapeake Bay Office on a comprehensive management plan for the trail, completed in 2011. Through the involvement of the public and trail advisors in the planning process, it became clear that the potential for the trail could be much greater than was evident in 2006. The trail we celebrate today is different from the trail that was designated a decade ago in several ways. While “water trail” is not part of the official name, proponents of the trail touted its uniqueness as an all-water trail that followed Smith’s explorations. However, the comprehensive management plan reflected public support for the trail to encompass landscapes as well as a water route, and for visitors to have opportunities for land-based, as well as water-based, experiences. We still think of the trail as the first primarily water-based national historic trail, but we no longer think of it as an all-water trail.

A second important difference is the scope of the trail. The official map attached to the legislation showed the routes of Smith’s explorations as where he could travel by boat. Pennsylvania was not mentioned in the trail legislation. A broader vision of the trail includes not just the travels of Captain John Smith and the Jamestown colonists, but also the lands and rivers populated by American Indians throughout the Chesapeake watershed at the time. In 2012, four rivers in five states—the

Susquehanna in Pennsylvania and New York, the Upper Nanticoke in Delaware and Maryland, the Chester in Maryland, and the Upper James in Virginia—were officially designated as part of the trail. These rivers, which added 841 miles to the roughly 3,000 miles of Smith’s voyage routes, expanded opportunities for public access, recreation, and tourism, and for telling a larger story of American Indian towns and cultures.

The Chesapeake Conservancy was the prime mover for expanding the trail, first by funding the study to determine the potential for historic connecting components and then building the coalition of water trail groups, state agencies, tribal communities, governors, and others to support the additions. Many of the same people who led the movement to designate the national historic trail were also at the forefront of the expansion. And some of the young staff who worked behind the scenes to help their mentors create the trail are now leaders in the Chesapeake Bay conservation movement. Notably, Joel Dunn, who worked for The Conservation Fund to establish the trail, now leads the Chesapeake Conservancy.

A third difference is less obvious, perhaps, but indicates an evolution in branding and interpreting the trail. Instead of a national trail to memorialize John Smith, as it was often promoted in the early days, we think of it now as the Chesapeake trail. Taking nothing away from the importance of Captain John Smith in providing the historical record of his time here that influenced future European settlement, his story is only part of what the trail represents. The greater Chesapeake story is much richer when it also reflects American Indian perspectives and the natural history of their Chesapeake homelands.

The Chesapeake Bay Commission devoted several pages in its 2006 annual report to the then newly created national historic trail and the partnerships that made it possible. The report concluded: “Without the leadership of The Conservation Fund, particularly Pat Noonan, the establishment of this water trail would simply have been impossible.”

Noonan would be the first to say that the trail exists because of the efforts of many people and organizations—known and unknown. In this 10th-anniversary year, we celebrate the vision and the visionaries who created the Captain John Smith Chesapeake National Historic Trail and who continue to shape its story.

Paula Degen recently retired from the Chesapeake Conservancy and National Park Service as an interpretive specialist for the John Smith Chesapeake Trail. Highlights of the Trail

2007 – Official inauguration of both the trail and the Chesapeake Bay Interpretive Buoy System during Jamestown 400 anniversary; replica shallop’s reenactment voyage to promote the trail

2008 – Trail Advisory Council established by Secretary of the Interior

2011 – Completion of Comprehensive Management Plan for the trail

2016 – The Zimmerman Center for Heritage in Wrightsville, PA becomes the first official contact station along the trail.